The Old and the New 2015 Personal experiences of Philip Coppens

In this paper, Philip Coppens discusses the highlights of his scientific experiences during a golden age of science in which new avenues were opened due to an unprecedented increase in experimental and computational facilities

Shedding light on the photochemistry of coinage-metal 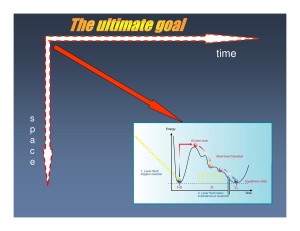 The Coppens laboratory combines crystallography, chemical synthesis, theoretical chemistry and spectroscopy, and includes the development of new methods for the study of solids by X-ray diffraction and spectroscopy.

Molecular excited states with lifetimes in the ns-ms range of are of crucial importance in the design of photoluminescent devices and as precursors in photochemical reactions.  Lifetimes in crystals are temperature dependent, and typical longer that those observed in solutions.  If high luminescence is of importance the lower part of the ns-ms range is preferable, for other applications longer lifetimes are desirable. The structure of molecular excited states with lifetimes down to 100 ps can now be determined at atomic resolution at synchrotron sources using laser-pump/X-ray probe techniques. Femtosecond atomic resolution experiments at X-ray Free Electron Lasers are clearly the next step to be implemented. 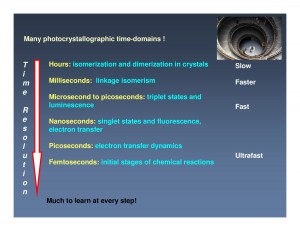 We have developed specific TR Laue techniques applied at the Advanced Photon Source which eliminate the dependence on the spectral resolution of the source and maximize the accuracy of the results obtained.  Link to synchrotron page xx For lifetimes above about 10 µs we are developing monochromatic in-house TR methods, exploiting the continuing dramatic increase in the brightness of commercial X-ray sources and in the efficiency of detectors. Link to in-house page. We use spectroscopic methods and theoretical calculations to complement the results.

The microsecond lifetime triplet state of an Ag2Cu2 coinage complex as determined by pump-probe diffraction at the BioCARS ID-14 station at the Advanced Photon Source. Left: schematic of the change. Right: the photodifference map

Polyoxotitanate nanoparticles play a crucial role as anodes in
photovoltaic cells, and as photocatalysts in processes such as here the oxidation of organic compounds in polluted air and
wastewater. In photovoltaic cells, electron injection occurs
from a photoactivated sensitizer molecule to a large band gap
semiconductor, which is typically composed of titania nanoparticles.
The electron injection depends on the energy levels of
the excited sensitizer molecule and the Fermi level and band
gap of the semiconductor, but also on the mode of attachment
of the chromophores and the structure of the semiconductor to
which they are attached. However, notwithstanding extensive
theoretical and experimental studies on the mechanism of
photoinduced electron injection, little precise structural
information has been available on the binding modes of the
sensitizers to the semiconductor surfaces.

We have synthesized, crystallized and determined the structure of a large number of polyoxotitanate nano particles and followed up by theoretical calculations using the precise structures and expermental measurements of spectra and bandgaps plus electron injection at the anodes of photovoltaic cells covered by a thin layer of the nanoparticles. An example of such a structure is given below.